In 1931, the Airstream dream began to create aerodynamically perfect lightweight trailers. And with it another dream was born, one that encompassed the concept of freedom, the discovery of new places, new experiences and new friendships. It was such a powerful and lasting dream that it did more than just create a new way to travel; it has created a new way of life, shared by thousands and thousands of families. This latest fleet of Airstream Trailers continues the tradition of extraordinary design and quality craftsmanship that has made the Airstream brand world famous. Following the belief of Wally Byam, founder of Airstream, "we don't make changes, we only make improvements," this fleet offers the latest in technology and comfort in a way that is absolutely Airstream.

Go to the models

“Adventure is where you find it, everywhere, in every place, except at home in the rocking chair.."

From an idea to the consecration of an icon

Our founder, Wally Byam, built the world's first Airstream travel trailer in 1929 and founded the company we now know as Airstream in 1931. But long before that, Wally grew up with a curious spirit, an eye for design. and a creed to live a life that puts adventure first. Today, the entire Airstream community keeps Wally's spirit alive and well, carrying on the same belief every day. 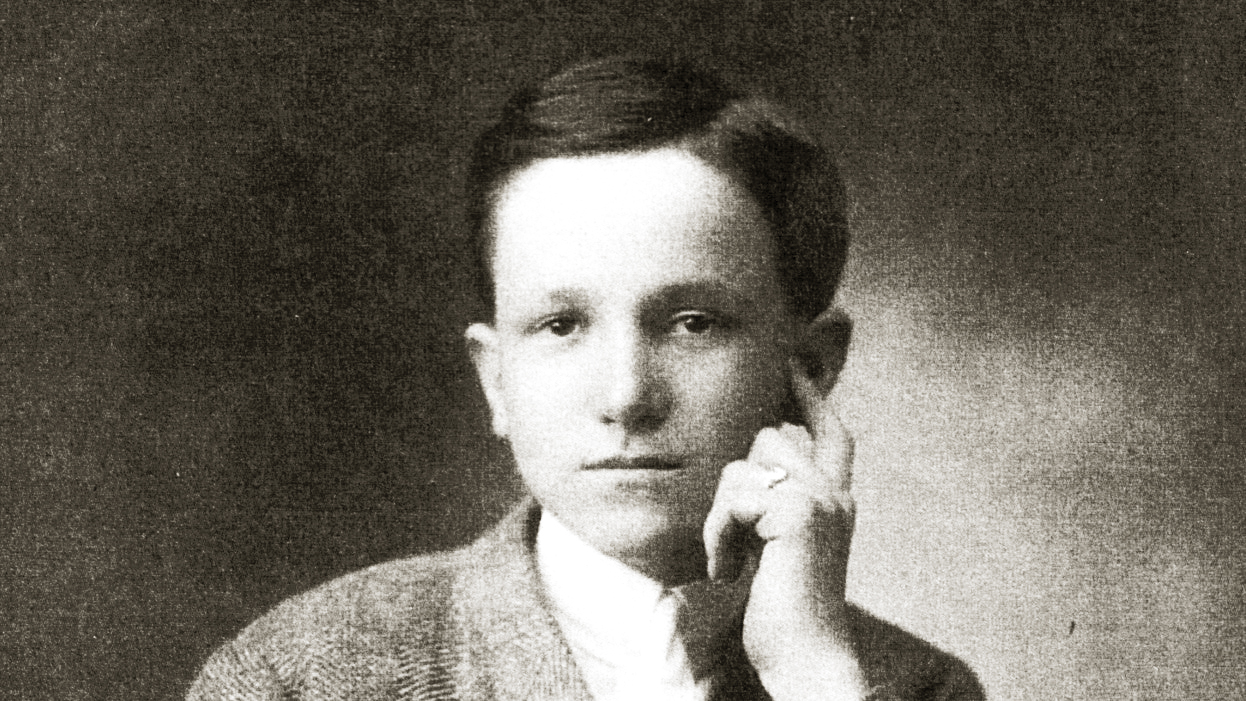 Wally Byam was born on July 4, 1896 in Baker City, Oregon. At the time, Baker City was a boom town along the Oregon Trail, which his grandparents had traveled on their journey west in a wagon pulled by mules.
Wally is named after his mother's brother, Carrie Biswell Byam, Wallace, who died shortly before Wally's birth. Wally was only three years old when his father, Dr. Willis Bertram "Bert" Byam, and mother they divorced.
Bert moved in and Carrie married a butcher named David T. Davis.
Wally developed his wanderlust in Oregon, where he spent his childhood surrounded by water, forests and hills to climb. He worked as a crew member in a sailing fleet, which only encouraged his thirst for travel. Wally also worked with his uncle Roger on a sheep farm in the mountains, where he lived in a wooden cart pulled by a donkey, just like his grandparents before him. Inside the wagon he had a stove, food, water and everything he needed, which would later inspire his first trailer.
When he was 20, Wally's stepfather was killed in a livestock accident.
A few months later, his mother died of a heart problem. Wally was alone.
His consistently high grades led him to Stanford University, and he worked several jobs to pay his way, graduating with honors in 1921. 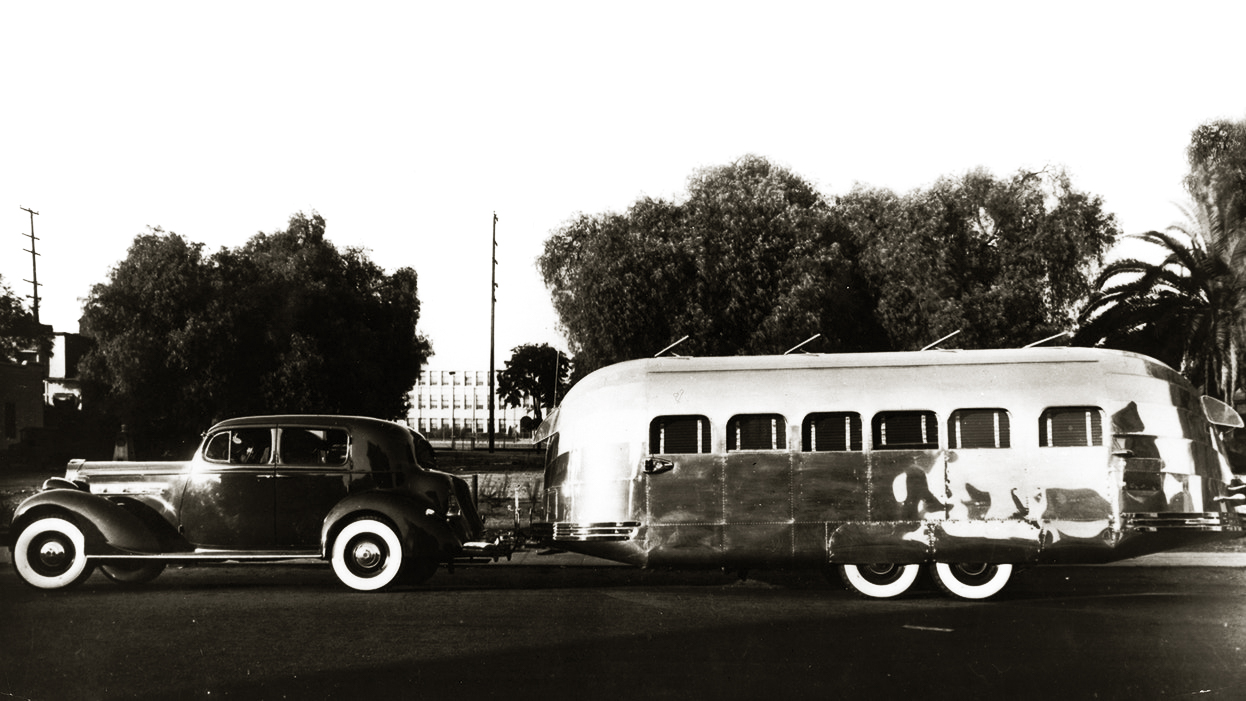 Upon graduation, Wally used his Stanford school newspaper experience to earn several jobs in advertising and journalism in Los Angeles.
For his part, Wally became an editor and owned seven magazines in the late 1920s. . Around the same time, Wally met and married his first wife Marion James.
They went camping together regularly, but Marion never liked sleeping on the floor in a tent.
When the stock market crashed in 1929, Wally's magazines went bankrupt and he needed a new venture.
It was then that he came up with the idea of ​​building a trailer not unlike the wagon he lived in as a child on the farm, but a Marion would have really enjoyed camping.
He started with a Model T frame with a tent gimmick on top. But it was tedious to put together on site and provided no protection from the elements. So he took that same platform and built a drop-shaped structure with sleeping space, a stove and an icebox.
Wally and Marion took the trailer camping and loved it as much as their companions. travel, together with their neighbors when they got home.
Wally posted a DIY guide in Popular Mechanics on how to build the trailer, and soon many of his neighbors commissioned him to build trailers for them. Eventually the demand was big enough that Wally opened a small trailer factory in California to build what he called the "Airstream", after the way they moved "like a stream of air" down the road.

At the helm of the company and the caravans 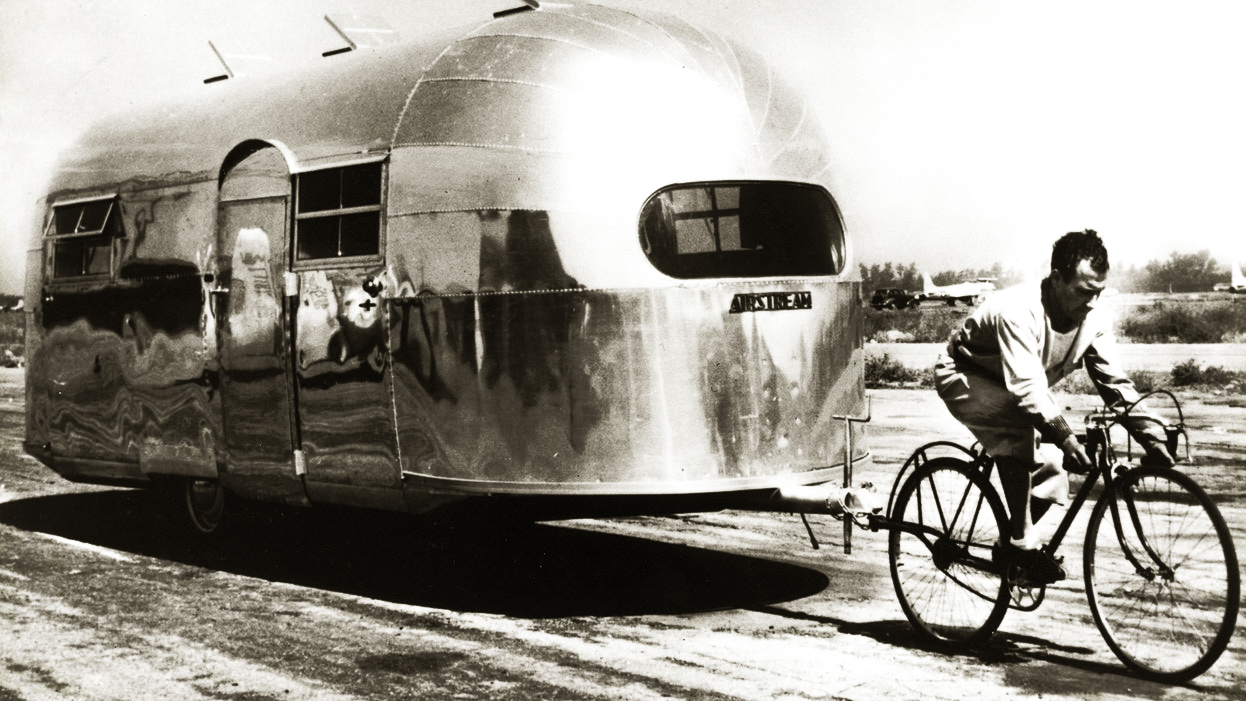 A boom of over 400 caravan companies began in the 1930s, but soon died out. Only Airstream remained standing, already known for the first riveted aluminum monocoque trailer, the Clipper.
Business was booming until World War II, when the factory had to close due to wartime demands for all aluminum available.
During the war, Wally held various jobs in the aircraft industry, including as a certified manufacturing engineer and production supervisor at Curtis Wright Industries.
When the war ended in 1945, Wally convinced Curtis Wright's management to let him design and manufacture a line of travel trailers. a trailer with a bicycle to demonstrate its light nature.
The image has become the famous Airstream logo.
Despite difficult financial times, Wally was able to reopen Airstream, with his eyes fixed more than ever on creating the ultimate adventure vehicles.
And in those difficult postwar years, he was the spirit of Wally to inspire employees to work harder than ever, including digging into their own pockets to pay for refrigerators and other parts to install in order to get a trailer out the door and sold.
Wally put a "lifestyle" at the top of Airstream's "sold" list, and that wasn't just a marketing ploy; lived and breathed it.
In 1951, Wally and a group of adventurers formed the first Airstream Caravan.
Their journey through Mexico, Guatemala, El Salvador, Honduras and Nicaragua was nothing short of harsh , visiting some of the most remote lands in Central America.
Wally was exhausted, but invigorated by the spirit of the caravan drivers.
Over the years, he and his second wife Stella would drive many more caravans across the country. 'Europe, Canada and the African continent.
On each trip, he looked for new ideas on how to improve his travel trailers. 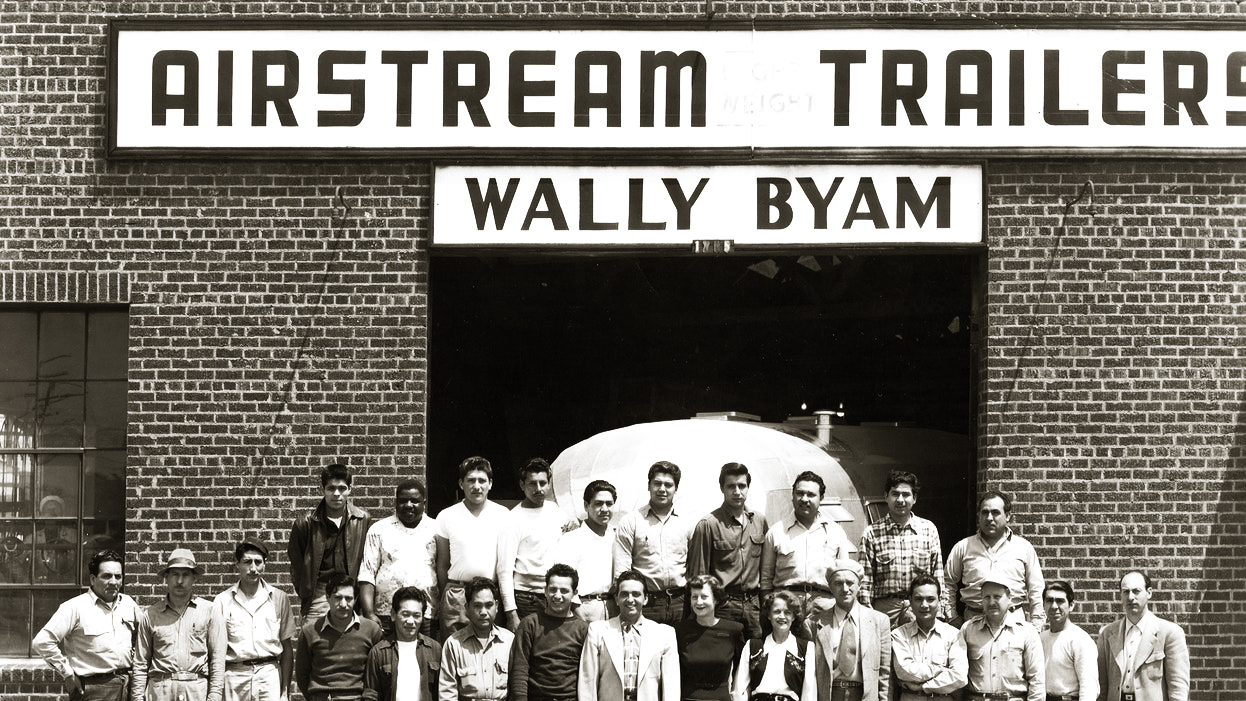 By 1952, Airstream had outgrown its Los Angeles facility and was in desperate need of expansion.
Rather than stay on the West Coast, Wally traveled east to explore places in the Midwest.
He spent a summer. to search Indiana, Illinois and Ohio before finding a factory for sale in Jackson Center, Ohio. With Cornelius "Neil" Vanderbilt, Jr. on the board and Airstream's apparent success, funding was easy to find, and Wally soon locked in his ideal second position.
And it turned out to be a Great Choice: More than 65 years later, Airstream is still producing trailers in the Jackson Center.
Wally led Airstream as president until 1955, when he suffered a heart attack and began preparing for retirement.
In 1957 he sold the company to Andy Charles in Ohio and Art Costello in California.
He was still very involved in business, inspiring people with his typical fighting spirit.
Wally died in 1962 in his sleep at his home in California after battling cancer. Shortly thereafter, the two divisions of the company (east and west) merged to become one, and the company was managed by Art Costello until his retirement in 1971. Today, Bob Wheeler is the eighth president and CEO of the company. company, and equally inspired by Wally's own thirst for adventure nearly 100 years ago.

“At the heart of these words is the dream of a lifetime. To those of you who find your promise in the promise of these words, I leave this belief as an inheritance ... my dream belongs to you. "
To put the great vast world at your fingertips for you who wish to travel with all the comforts of home.
To provide a more satisfying and meaningful way to travel that offers complete travel independence, wherever and whenever you choose to go or stay.
To keep alive and make real a lasting promise of high adventure and faraway lands ... to rediscover old places and new interests.
To open up a whole world of new experiences ... a new dimension of fun where travel adventure and good company are your constant companions.
Encourage clubs and events that provide an inexhaustible source of friendships, fun travels and personal expression.
To lead the caravans everywhere the four winds blow ... on glittering avenues, through deserts without roads ... to the corners of the earth beaten and not traveled.
To play a role in promoting international goodwill and understanding among the peoples of the world through person-to-person contact.
Endless striving to stimulate the adventurous spirit that drives you to follow a rainbow to its end ... and thus make your travel dreams come true.